A Summary of a Communion Living in Hope

A Poignant Moment in the Renewal of God’s Project

The Fifteenth Lambeth Conference of Bishops and Spouses is a unique gathering of Bishops and Spouses of the worldwide Anglican Communion. Convened every ten (10) years under the aegis of the Archbishop of Canterbury and his spouse. The previous gathering of such august body was convened in the summer of 2008. The 2020 Lambeth Conference was scheduled to take place in the summer of 2020. However, the COVID 19 pandemic delayed it by two years. It is noteworthy that ever since the Diocese of Easton was formally established in 1868 with the calling of its first bishop +Henry Lay our diocese has been a faithful contributor to the pursuit of a global communion. Bishop Lay attended Lambeth Conference in 1867 when he served as Missionary Bishop of Arkansas. As Bishop of Easton, he attended Lambeth Conference in 1878.   In 2008 Bishop Bud and Lynne Shand attended on behalf of DOE.

As your incumbent Diocesan Bishop, I am living into this established tradition as my predecessors and was honored and humbled and acceded to the request of the Lambeth Conference Planning Team to be a facilitator of one of the Bible Studies and Lambeth Calls Bishops’ Group. My group was GROUP 5A. The accompanying photos offer a glimpse of my colleagues’ group of bishops. The group also included Bishop Tim Thornton, (not in photo) retired bishop in the Church of England who was on the planning team. He and I have become close friends and colleagues. Over 650 bishops and 450 spouses including over 500 volunteers, staff and stewards were engaged in executing a very inspirational, energetic, consequential, and hopeful conference. The Archbishop of Canterbury, the Most Reverend and Honorable Justin Welby and his wife Caroline Welby should be commended for pioneering and executing one of the better organized Lambeth Conferences against the backdrop of a global pandemic-COVID 19. Yes, there were reports of bishops and spouses infected by the virus, however, the medical staff on hand did their very best to ensure all covid protocols were observed. Lynn and I took precautions and conducted frequent self-tests and masked up except when having meals and photo-ops.

I must confess that I went to the Lambeth Conference with certain apprehensions and concerns:

Lambeth Conference invited bishops and spouses to spend time in prayer and study on I Peter. Surprisingly, the richness in inspiration this epistle offers in all its myriad challenges for the first century era was received with gratitude and grace. It was written for an exilic and alien audience of Christians living in persecution and alienation as refugees and strangers in a foreign land. The Archbishop of Canterbury delivered some masterpiece expositions before bishops and spouses broke off to their study groups. I encourage you to access these expositions and his three keynote addresses, they are worth listening to and reflecting upon: www.lambethconference.org.

In concluding, the diocesan family will be benefiting much from learnings, exposure, and relationships at Lambeth Conference 2022. Lambeth was a conference in repairing the impaired image of fellowship within the communion. As the Archbishop of York, the Most Reverend Stephen Cottrell stated, “some years ago they were about leaving the communion, now the talk is wanting to get into the communion”. 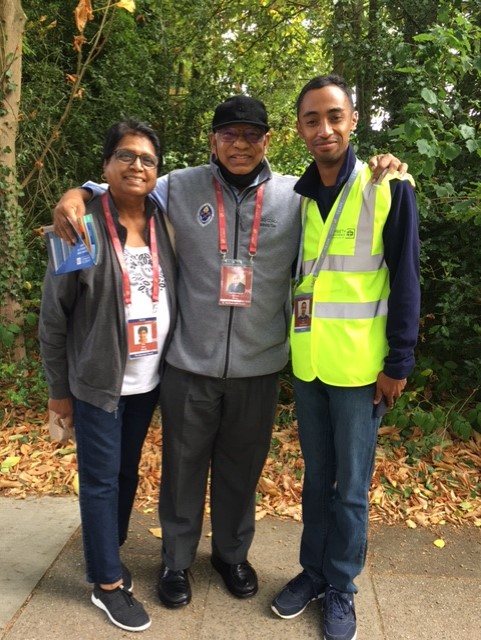 San and Lynn with Marc Ranarivelo , one of the many young Lambeth Stewards across the Anglican Communion whose role was to ensure bishops and spouses were offered the best possible assistance. Bishop San was one of the consecrating bishops for Marc’s father, the Right Rev. Joana Ranarivelo when he was consecrated coadjutor Bishop for Antananarivo, Madagascar. 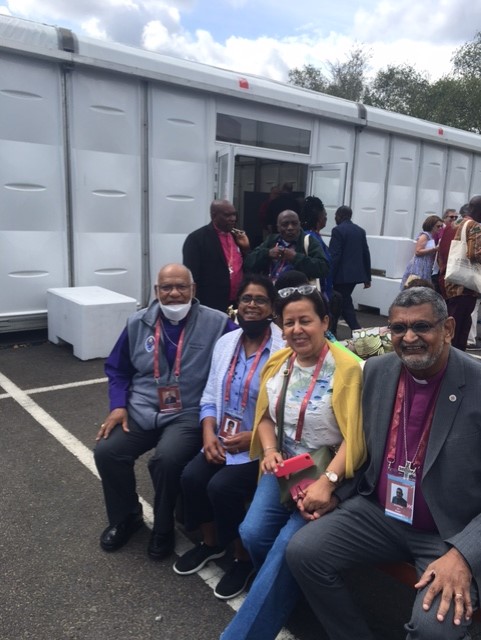 Bishop San and Lynn with Archbishop Ian and Kamila Ernest. Archbishop Ernest was Primate of the Indian Ocean when San was Bishop of Seychelles.  He is now the Director of the Anglican Center in Rome. 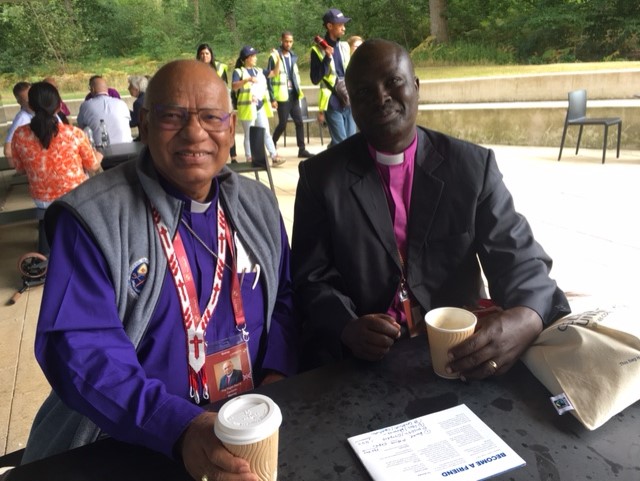 San with a colleague bishop from South Sudan. 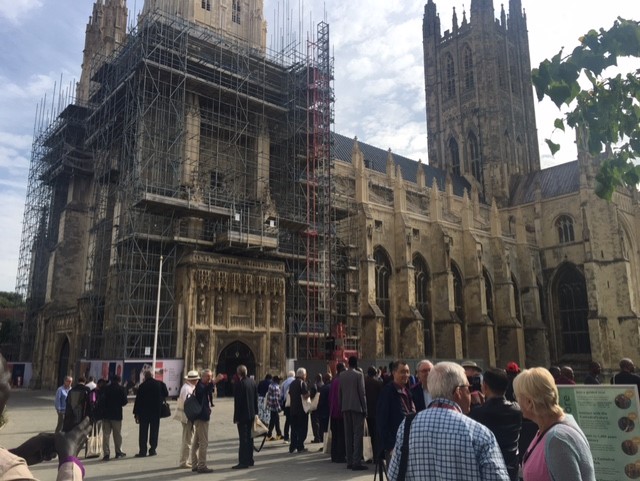 Canterbury Cathedral. The home of Anglicanism.  Bishop’s gathering for the first of two days of the Bishop’s Retreat. 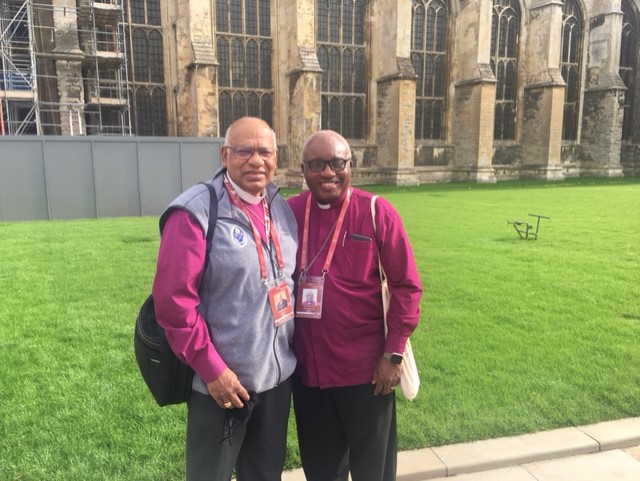 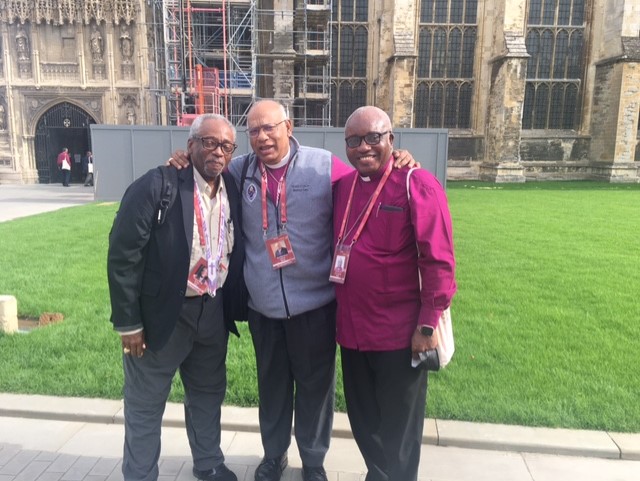 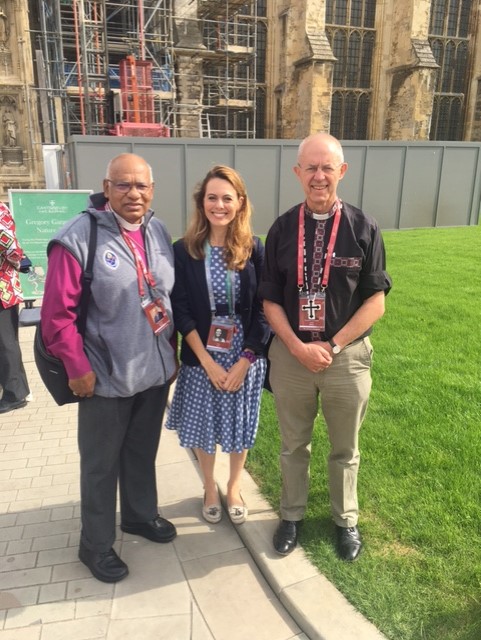 San with Keira Phyo of the Difference Initiative (some of our parishes have been engaging with this program) and the Archbishop of Canterbury in front of Canterbury Cathedral. 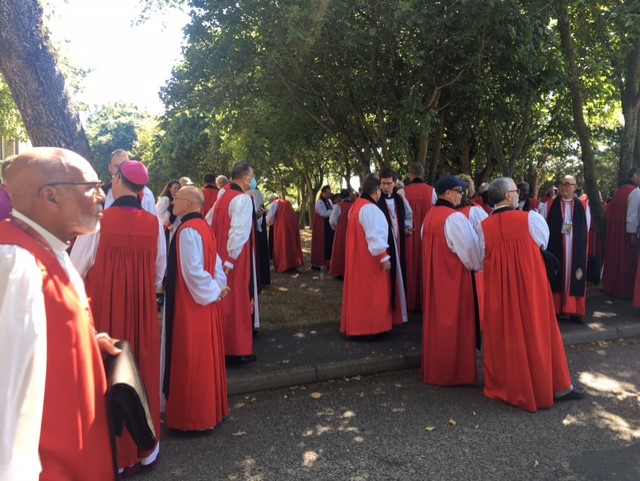 Bishops gathering for the bishops and spouses group photos. 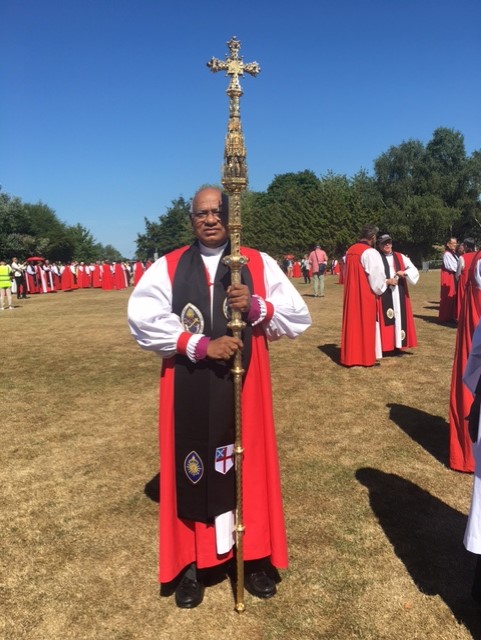 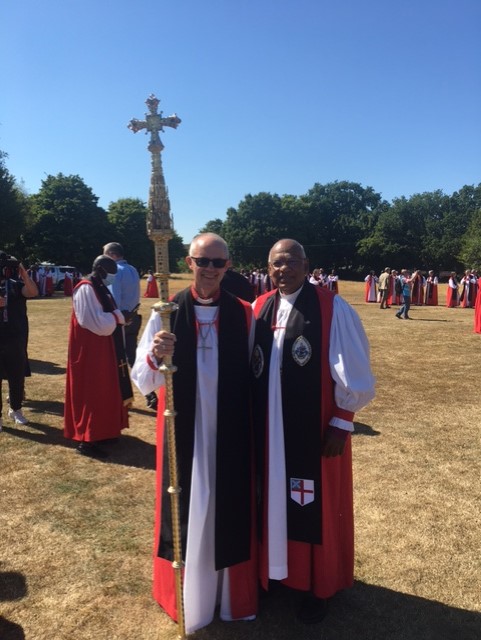 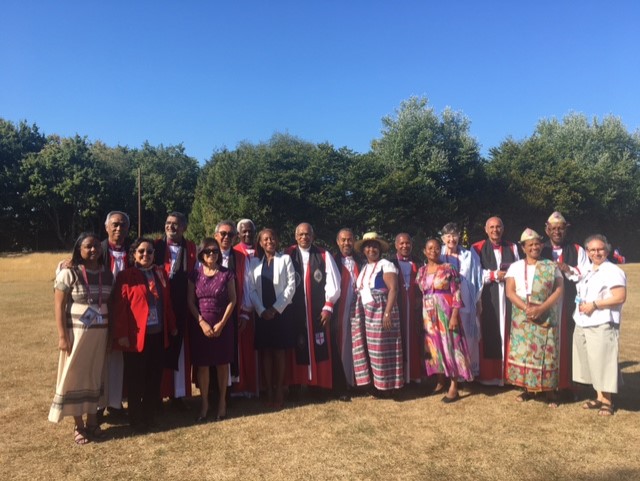 Bishop San with bishops and spouses of the Province of the Indian Ocean. 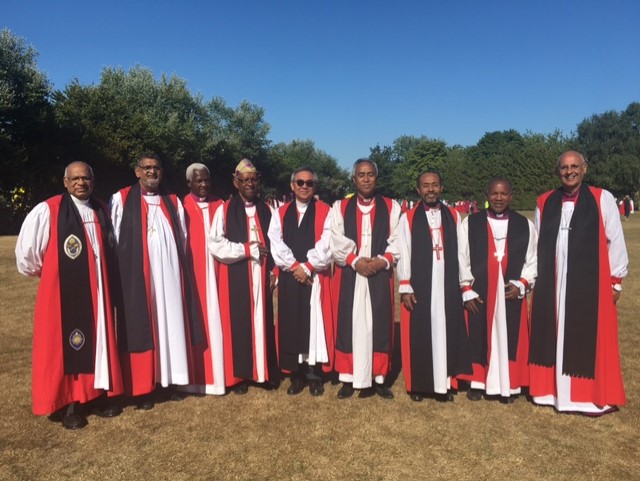 Bishop San with bishops of the Province of the Indian Ocean and the Director of the Anglican Center in Rome. 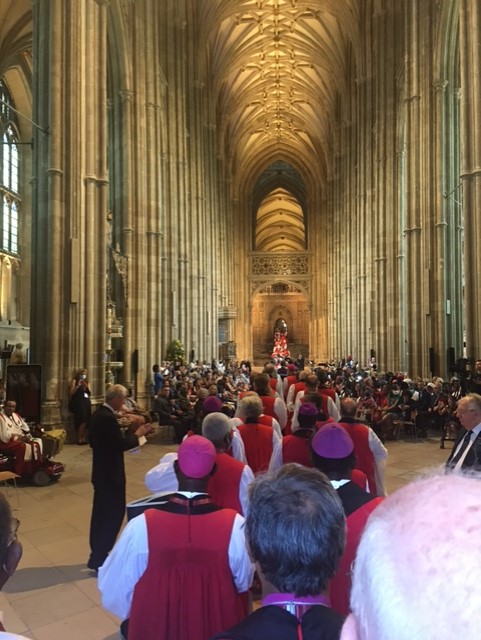 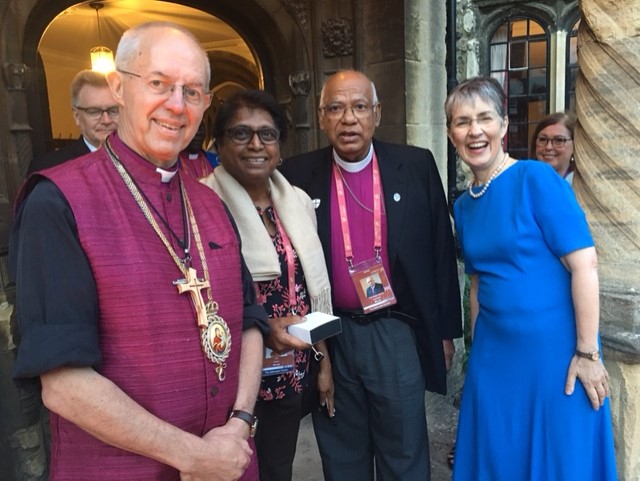 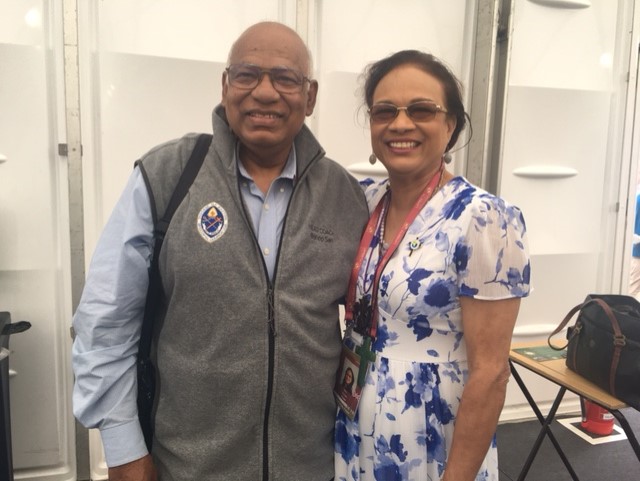 San with Sharon Harper, President of the Worldwide Mothers Union. Sharon is a longtime friend of San and Lynn and like San and Lynn hails from Guyana. Sheran is the first non-UK person to hold this prestigious office in the Anglican Communion. 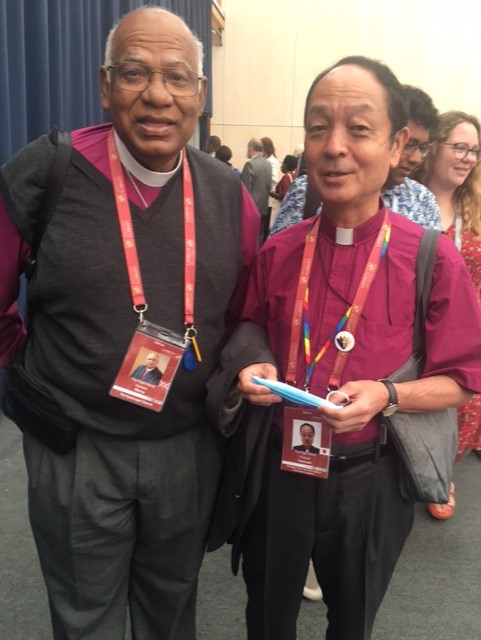 Bishop San with the Bishop of Tokyo Bishop Francis Xavier Hiroyuki Takahashi. Both are the bishops of the Rev. Canon Michael Moyer who is currently serving in the Diocese of Tokyo. 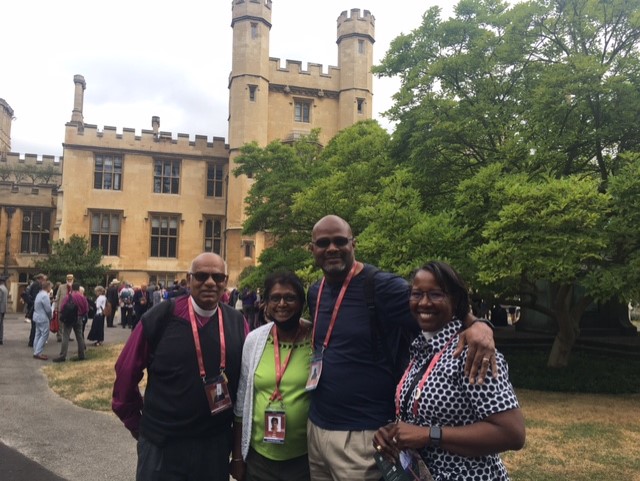 Bishop and Lynn in front of Lambeth Palace with Bishop Jennifer Baskerville-Burrows and her husband Harrison. Bishop Jennifer is the Bishop of Indianapolis, and her spouse is the surrogate son of San. Harrison was San’s youth leader in the Parishes of St. Simon – By – the Sea and St. Anne North Abaco, Bahamas. 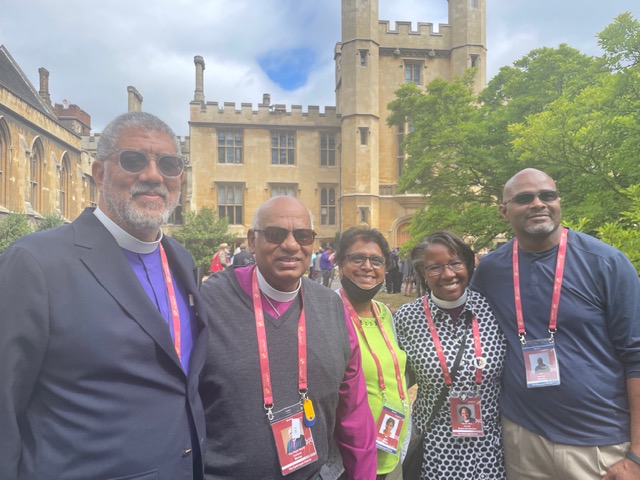 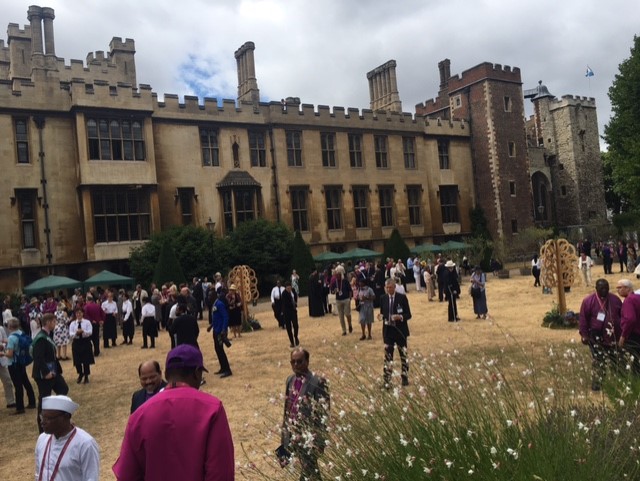 On the grounds of Lambeth Palace for London Day. 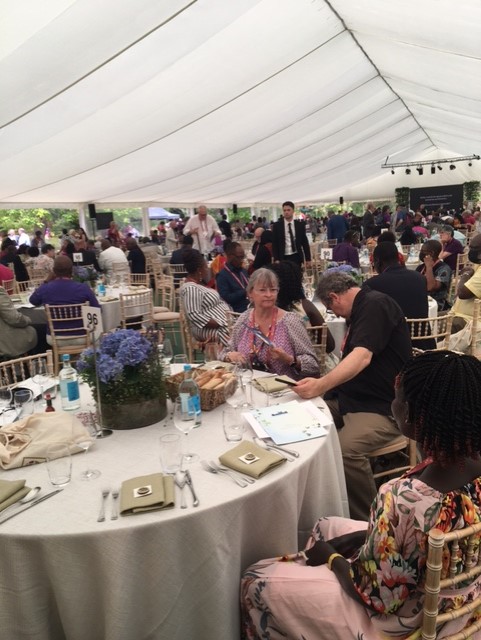 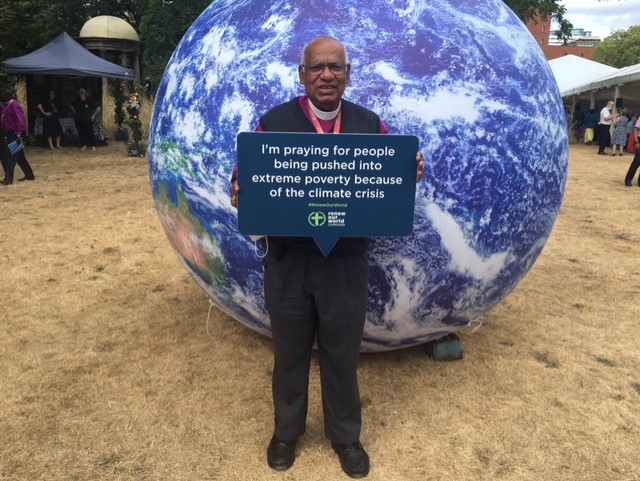 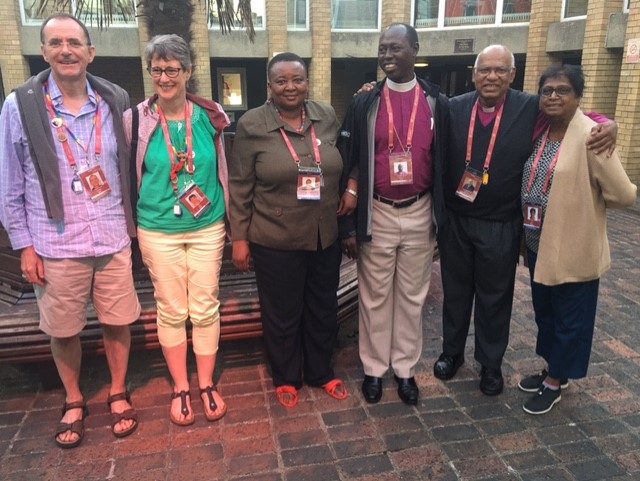 Dinner with Bishop Swift and his wife Mary from the Church of Scotland and Archbishop Samuel Enosa Peni of South Sudan and his wife Aida at a dinner meeting discussing a possible three-way companionship between the three diocese. 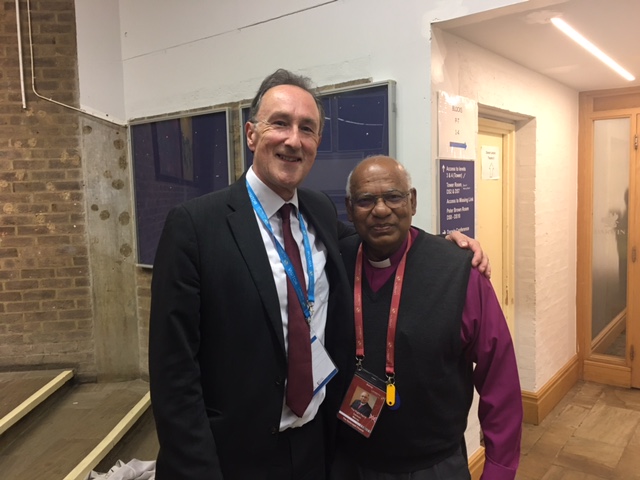 Getting ready to join the coach to Canterbury Cathedral for closing eucharist. 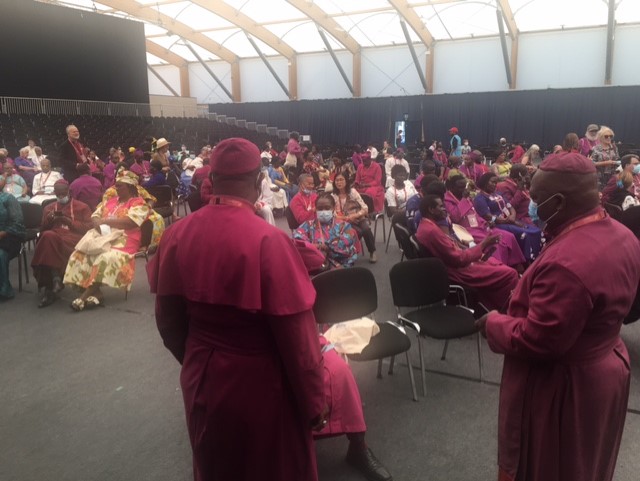 Bishops waiting to board the coach to Canterbury Cathedral. 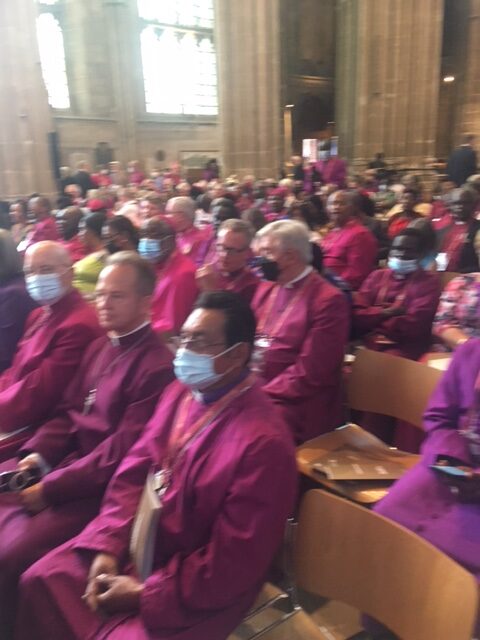 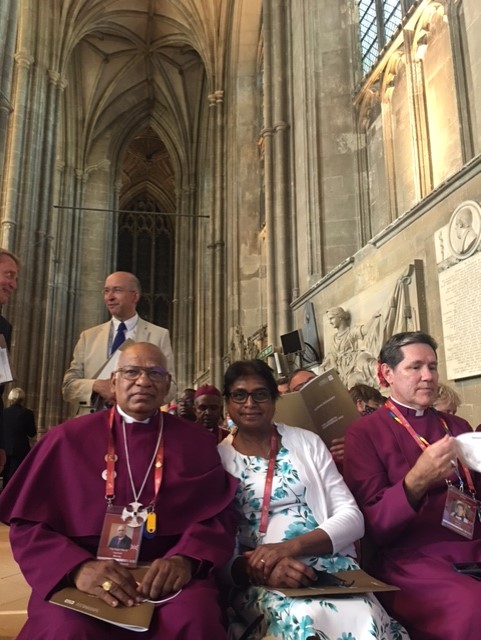 Bishop San and Lynn awaiting commencement of the closing service. 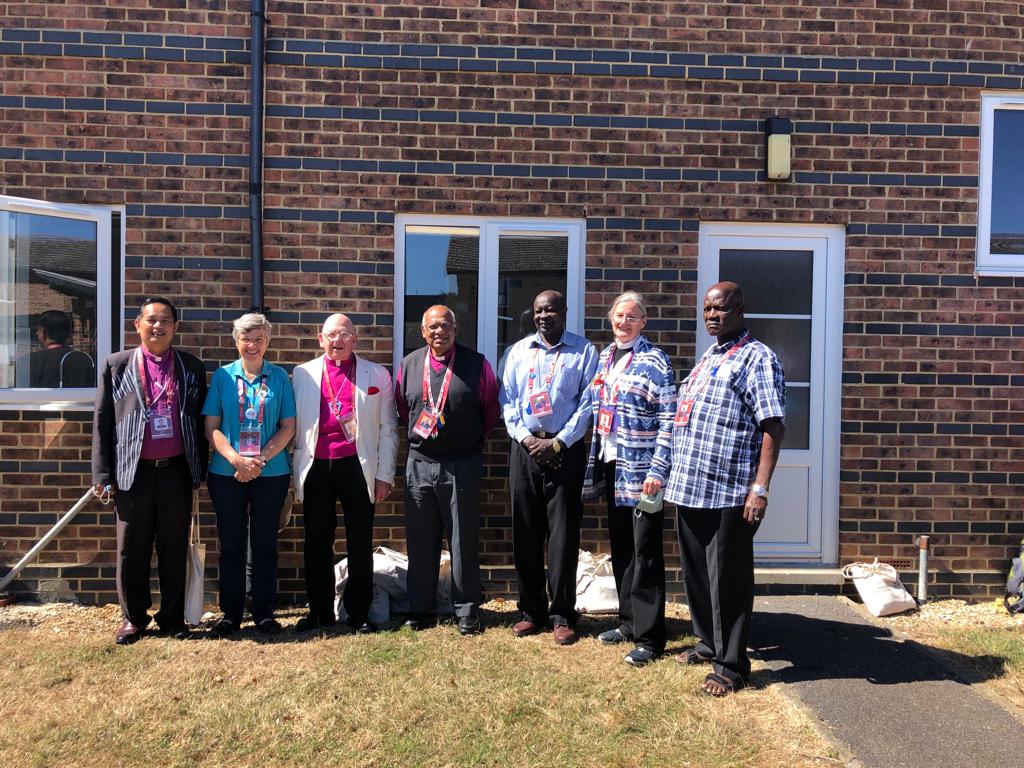