Notes from the Bishop – October 13th 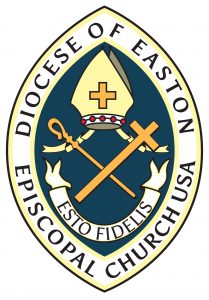 Bishop’s Communique to the Diocese

The Diocese of Easton continues to prepare for the intense volume of work that is generally associated with the final quarter of the year. It moves into this phase of our common ministry with mission and ministry as the center of its focus.

The three-year delayed Invite Welcome Connect evangelism initiative was finally accomplished on Saturday, October 8, with over 40 participants, clergy and lay, from 19 parishes within the Diocese. The program was led by Mary Parmer, the creator and pioneer of the program widely used across the Episcopal Church. My observation and interaction suggest the training was well received by participants. It is anticipated it will be replicated across parishes in the diocese. The Department of Missions will be tasked to monitor and encourage implementation, training, feedback and all aspects associated with its effective roll out.

The diocese bid farewell to our Canon to the Ordinary, the Reverend Canon Patrick Collins. Patrick came to the diocese in February 2015 and served under Bishop Henry Parsley and the current incumbent. He will be sorely missed by everyone, and we wish him God’s blessing in his new role as Interim Rector at St Stephen’s Episcopal Church in the Diocese of California.

In the meantime, the diocese has made several new appointments including Mr. John Dragone as Part-time Canon to the Ordinary. The Diocese has appointed Dr. Mark Hansen, Part-time Lay Diocesan Missioner for Hispanic/Latino Ministry. Dr. Hansen currently serves as Lay Pastor, St. Clement’s Parish, Massey. He is adding Hispanic/Latino Missioner to his present portfolio. This appointment fulfils a commitment made by earlier Diocesan Conventions. Dr. Lynn Wiljanen has been appointed Director of the Bishop’s Institute, as Dee Reinhart has intimated her desire to retire as of December 31. 2022. Dee has committed to continue to assist with training and formation as needed. Ms. Megan Timms has been appointed to the position of Finance Administrator effective January 1, 2023, replacing our faithful, dedicated and long serving Finance Administrator, Mr. Art Kendall who is retiring on December 31, 2022. Megan has been Art’s understudy for the past three months and will continue to do so until Art officially retires on December 31, 2022. Of note, these appointments are likely to be budget neutral for the Diocese.

Diocesan Convention is scheduled to be held March 4, 2023, at St. Peter’s Episcopal Church, Salisbury, under the theme: “Reaching Rising Generations – Mission Imperatives of a Post-Covid Church” (Isaiah 40:30-31; Matthew 13: 51-53). Our theme applies the Invite Welcome Connect initiative with a focus on rising generations, the third component (Parousia III) of the overall Diocesan Vision ‘Parousia – God’s Vision for God’s Church on the Eastern Shore of Maryland’.

Both the Standing Committee and Diocesan Council resolved to designate this project, “Chancellor David Booth Beers Constitution and Canonical Review Memorial Project”. Chancellor David Beers died on April 3rd, 2022, after a brief illness. He was the esteemed Canonical Consultant to the project, who had retired as Chancellor to the Presiding Bishop in 2018, having served four presiding bishops from 1991 to 2018. He was 86 years old.

As bishop and servant of this church, one of my duties is to preserve the integrity of the church and wherever appropriate honor the servants of God’s church. The late David Beers in my humble opinion was credited for preserving the Episcopal Church during some rather challenging and difficult periods most notably during the controversy on human sexuality. The effects of those divisive and schematic events continue to haunt and define our church’s witness. “Over his many years of service, David’s knowledge of civil and church law made his advice and counsel invaluable,” said the Rt. Rev. Frank T. Griswold, 25th presiding bishop.  Bishop Griswold further noted, “Given his reputation for evenness in handling difficult and sometimes emotionally fraught situations, bishops and other members of the clergy turned to him frequently and were never turned away. At the same time, chancellors serving other bishops sought his counsel, and with his encouragement, established a network of their own. The health of the church as a whole, in its fidelity to the Gospel, lay at the heart of what can only be called David’s ministry.”

It is of indistinguishable note, the Constitution and Canons Review in the Diocese of Easton was the final defining work of this ‘faithful son’ of the church and as such it is only fitting and proper to give him this honor posthumously.

Delegates, clergy and lay, will recall that the body of work on the review of the Constitution and Canons of the diocese was debated, deliberated, and prayed over (for the guidance of God’s Spirit), before it was successfully voted upon by Diocesan Convention 2022. The Constitution comes to Diocesan Convention 2023 for its second vote. I am confident in the wisdom of convention to vote in favor. When this solemn act is administered, it will immediately repeal and replace the Constitution and Canons of the Diocese of Easton currently in use.

The last comprehensive review to our Constitution and Canons took place over 60 years ago. We are in a post-covid, 21st century church, and as such the diocese has important ministry opportunities to engage in service to God’s Mission in this world and particularly on the eastern shore of Maryland.

Therefore, to all members of the diocesan family, I am strongly advising and counselling against submitting any constitutional amendments for this Convention. Submitting any such amendment would delay the implementation of the new and revised Constitution and Canons (for at least another year). This would derail seeing to fruition the half a decade of hard work set forward by our Taskforce, Constitution & Canons Committee, and finally by our 2022 Diocesan Convention. I am directing the Constitution and Canons Committee to indicate my pastoral counsel to anyone considering amendments to the constitution at the 155th Diocesan Convention 2023. My beloved, there will be other years to submit such amendments, this upcoming convention isn’t one of those years.

I realize that some among the members of the diocese may wish to submit amendments pertaining to their ministry and I genuinely respect that – I am simply asking that they delay submission for a period of time. The biblical and theological warrant for this advisory comes from the Prophet Isaiah 7:14, the prophet pronounced to the world of 8th century BC the inevitable coming of the Savior through a virgin birth, an event in salvation history that was not consummated until the 1st century AD (Luke 1). God delayed the incarnation of our Savior Jesus’ coming for nearly 700 hundred years; nothing is so immediate in the church that it can’t wait. God shows this model, and the Church would do well to emulate God’s character.

As everyone is fully aware, I humbly, respectfully and deliberately recused myself from any discussion or debate on the Constitution and Canons review process, convocation meetings or convention debates. By this approach, I was modelling the role of a responsible bishop of my beloved diocese, giving each delegate freedom to debate freely without any perceived notion of episcopal intimidation or control. I am now expecting the diocese to act in a similarly modest, humble, reverential, responsible, and restrained manner. It is my expectation that every delegate, clergy and lay, will respect my humble appeal to convention. To this end, I am beseeching vestries and parishes of the diocese to advise their elected delegates to the 2023 Diocesan Convention to honor my pastoral counsel.

When I was invested as the eleventh bishop of the Diocese of Easton on October 15, 2016, I confirmed to vows of faith, prayer filled life, study, obedience and guardianship, one of those vows was, “Will you guard the faith, unity and discipline or worship, doctrine and discipline of the Church”, to which in the witness of present I solemnly responded, “I will, for the love of God”.

The Constitution and Canons is the discipline of this Church. This advisory compels God’s servant to live into, model and practice this sacred vow. It isn’t uncommon for a bishop from time to time to offer pastoral guidance to his or her diocese. My beloved, this communique is a pastoral guidance and not a directive.

Please be advised that I have extended an invitation to the late Mr. David Beers’ family members to join the proceedings of convention, via zoom, to witness this landmark vote of conformity and participate in the brief liturgy to commemorate David’s life and witness.